skip to main | skip to sidebar

a reason to celebrate 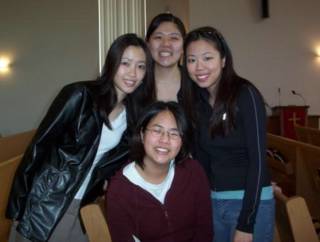 i just wanna give a shout out to my dear sister lynn who was baptized this past Easter Sunday... i'm rejoicing with u! God-willing, we'll be seeing more of each other in the future... *ahem* t-n--l- *cough* ;)
7 comments:

insulin and aging 101 (as promised)

this post is dedicated to those who love science as much as i do :) i've presented the information in a simple, easy-to-follow format for the benefit of anyone willing enough to read on.

insulin-resistance and its contribution to aging

key point: too much insulin in the blood has profound pro-aging effects

let's start with the basics:

let me use this example:

when your insulin levels are high:

are you scared of insulin yet? there's more:

what does a high blood sugar level lead to?

conclusion: insulin-related metabolic changes foster aging and associated major degenerative changes such as obesity, heart disease, and type 2 diabetes. simply put, insulin has a great deal to do with how gracefully or poorly you age.

i've always liked chocolate... but it's been a while since i've consumed it so voraciously or in such massive quantities. i have a stash of chocolate in my room that i've managed to maintain for those momentary cravings, but that stash is on the verge of extinction! i'm inhaling the stuff, seriously. i dunno what's come over me. and frankly, i'm a bit concerned as to where all that junk is going or what it's doing to my body... my insulin's probably going nuts with all that glucose in my blood... speaking of which, i read something the other day about the role of insulin in aging... crazy interesting.

i hope no one irish reads my post today :P being a new ong bak/tony jaa fan and all, i was checking out a bunch of sites and i happened to stumble across this piece of information on the muay thai section of the australian ong bak site (go check it out! the other links too!):

"In 1767, Thailand was at war with the Burmese and a champion [Thai] boxer Nai Kahnomtom was captured by the Burmese king Angwa. King Angwa called for a boxing match, the first Muay Thai match outside of Thailand and Nai Kahnomtom defeated all ten Burmese challengers in succession, with no rest at all between the ten fights.

"As a result, Nai Khanomtom was honored as The Father of Muay Thai and the day of the fight, March 17th is now officially named ‘Muay Thai day’ in Thailand."

what are the chances i'd discover that today?? so yah, i figured recognition of muay thai day ought to take precedence over st. patrick's day... on my blog, at least :)
4 comments:

take my breath away!

i cannot remember the last time a movie has taken my breath away like ong bak. and i don't mean screenplay or cinematography or special effects or whatever... i mean tony jaa and his moves. period. the "no stunt doubles, no computer graphics, no strings attached" tony jaa. dayam! i couldn't even sit still throughout the movie... haha, u shoulda seen me on my couch flinging my elbows and legs around and heard all the ruckus i was making... i got sooo totally into the action! beautiful! the elbows, the knees! the elbow-knee combos! on top of the stunts and everything else! holy crap, the skills!! amazing... the guy just blows me away!! i gotta give mad props to muay thai (someone should be pleased to hear that :P) cuz tony jaa really knew how to bring it! if u're into martial arts or action and u haven't seen ong bak, GO SEE IT!!
11 comments:

a lot of the book of proverbs talks about the 'wayward woman' and how deceptive she is and how to avoid all her evil traps and enticing ways lest she lure u in and prey on u and add u to her long and growing list of victims... yah yah ok, fine, but what about the 'wayward man'?? when i first read proverbs, i remember thinking to myself how one-sided solomon's advice was... what about the other way around? what kind of men are women supposed to avoid? anyway, i went through the book again recently and i found a verse for us ladies [proverbs 20:6] :

Many a man claims to have unfailing love, but a faithful man who can find?

haha... good one solomon, thanks for coming through for us :)
8 comments: 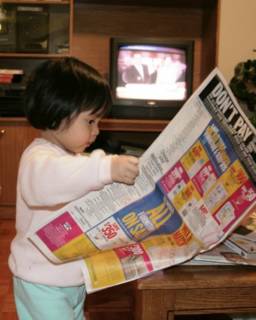 "hmm... pretty good deal on this high chair.
dun gotta pay for it til i'm three years old.
i should have more than enough by then!"
3 comments:

so i watched kill bill for the first time tonight.

there was this song that came on several times in the movie and even during the credits (i think the first time it came on was when the bride was being given her sword) and when i heard it, i was like, hey i know that song! i love that song. it totally brought back memories. but i dunno what it's called. i first heard it in regina... channel 4 (cbc i believe?) used to run this short animation thingy between programs and they had this one animation about a bird... two birds actually... one bird was plain-looking and the other bird was grand and beautiful, and the plain-looking bird wished that it could look like the beautiful bird. the whole thing was so sad... the bird trying so hard to be what it wasn't because it couldn't see its own beauty. anyway, that song was the background music for the animation and i fell in love with both the song and the story. (there's something about the song that just makes me wanna cry... maybe it's that beautiful pan flute playing.) i've wanted to know what the song was called but it's been a decade since my regina days and i've forgotten about it til now. i suppose i could just look it up on the net... but i probably won't. i'll just continue to let it be that mystery song i love so much :)
9 comments:

anyone need their driveways shovelled?